You are here: Home / News / Own the narrative, tell the story: GC36 Communications 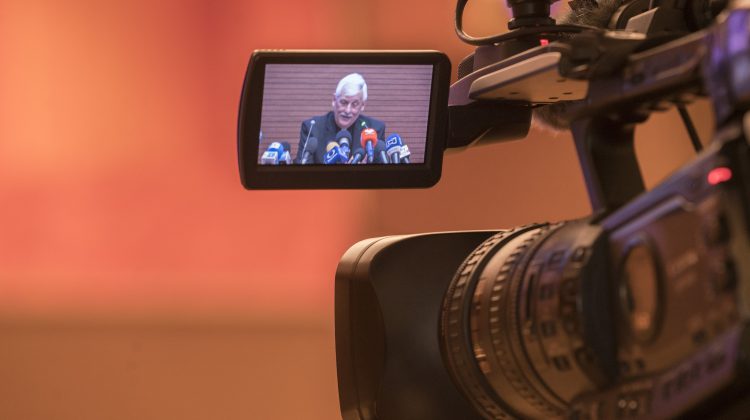 This is the mantra that Jesuits involved in media and communications have been using for decades: “Own the narrative. Tell the Story.” It has fed our passion for media work, guided our desire to create content, and pushed against the traditional understanding of what it means to spread the Gospels. That mantra was also the impetus behind a radically different way of reporting a General Congregation.

The secrecy that normally surrounds a General Congregation is not born of fear that the world will know what we’re doing, but out of the need of TRUE discernment to NOT be swayed by popular opinion — to discern with nothing more than the facts, the voices of the delegates and the movement of the Holy Spirit. We have been also learning about the importance of – at the same time – facilitating information and insights enough so the rest of the jesuits and the apostolic body of the Society of Jesus could also accompany the Congregation as it evolves. To create a story that would be compelling to a New Media audience and yet acceptable to our way of proceeding, we needed a media plan that would allows us to shape our narrative in an era of blogs, YouTube, Facebook and Twitter, while respecting the spirit of discernment and help our wide apostolic body to be part of our dynamics.

In GC33 and GC34 the communication strategy was based on a fax sent to the provinces every three or four days with updates. In GC35 we started to use e-mail and for the very first time a micro-site was designed to publish on-line the updates on the congregation, almost in real time. In that time, 2008, the social media was just starting to reach the global stage. This time, at GC36, we knew, was the time of the video and the social media. In our connected world we wanted to be the ones telling the story about GC36, so the narrative and the dynamics around the Congregations could be also an opportunity to pray, understand, connect and accompany the Society of Jesus in such an important moment.

In early 2016, the Coordination Committee of GC36 asked for the creation of that media plan. Patrick Mulemi (ZAM), Daniel Villanueva (ESP), Flavio Bottaro (ITA) and Pierre Belanger (GLC) were chosen to form a Core Group that would be responsible for  setting goals for GC36 coverage, building partnerships with provinces and media institutions around the world, and gathering an international team of communications specialists with the skills needed for a multi-faceted media campaign. As the planning continued, it became clear that we needed an on-site team that could take photos, shoot and edit videos, produce content, and manage a growing team of writers and bloggers who were willing to contribute to the coverage of GC36. The final team was composed by 12 professionals from Canada, Germany, Italy, Nigeria, Spain, United States and Zambia. Know more about the Comm Team.

Together with Jesuits from around the world, and with the help of the delegates themselves, the GC36 media team has created hundreds of written stories, produced hours of video content and taken thousands of photos that have covered everything from morning prayers, to the election, the visit of the Holy Father, and the work of creating documents and decrees. The media team’s content, produced in 4 languages, has been seen by more than 2 million people in almost 200 countries.

More than just numbers, the coverage of GC36 has allowed Jesuits and non-Jesuits around the world to be connected to the congregation in a way previous unseen. Provinces and development offices have had instant access to photos, videos and stories that show their delegates participating in the international governance of the Society. Friends of the Society have been able to see the importance of lay collaboration at the highest level of governance. The Church Militant has seen the congregation deep within prayer and discernment. Interest in the happenings at the congregation has spread beyond the typical Catholic networks into mainstream news organizations… and perhaps most heartwarmingly, we’ve received messages of support from superiors and individual Jesuits who tell us of dinners and socials filled with the latest news from Rome, courtesy of GC36.org.

In the coming years there will be many discussions about what worked and what didn’t, where we pushed the line of what was appropriate to our way of proceeding and where we could push harder still, but the GC36 media team will leave Rome knowing that our hard work and long hours have helped to move the congregation more into the digital age. We will look back on our pictures and our videos, our articles and blogs, and know that we’ve owned our narrative and told the story of this moment in the history of the Society of Jesus.