You are here: Home / News / Welcome to our house: Jesuit curia in Rome gets modern updates 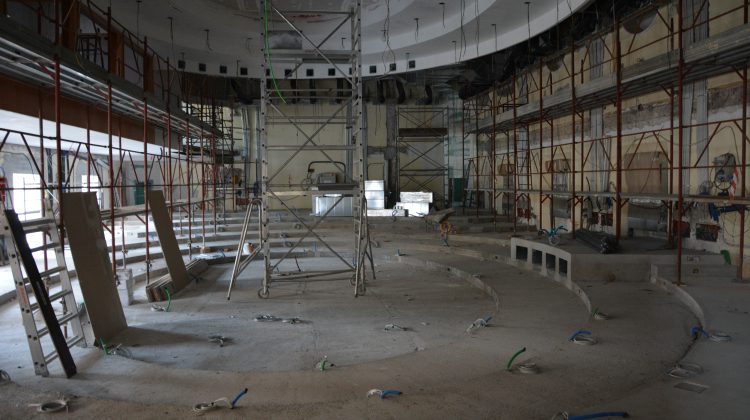 The sounds of jackhammers and table saws punctuate the workday at the Jesuit Curia, the worldwide headquarters of the Society of Jesus, just steps from the Vatican. For more than two years, the sprawling complex has been under renovation, and with the Jesuits’ General Congregation 36 in early October, the pace has accelerated. The project is scheduled to be completed by July 31 — St. Ignatius Day — which is welcome news for the 51 Jesuits from around the world who live and work at the Curia.

There’s an old real estate maxim stressing the importance of location, location, location, and the Jesuit Curia is proof of that time-honoured adage. From the roof of the 110-room 1927 brick building, there’s a jaw-dropping view of the dome of St. Peter’s. But there’s so much more that makes this place special, including a chapel that houses the relics of 16 Jesuit saints; an archive that boasts a priceless treasure trove of documents and artefacts; and a terraced garden completely hidden from the Curia’s bustling entrance at #4 Borgo Santo Spirito.

The expansive headquarters abuts the 90-room St. Peter Canisius Residence (the Canisio), home to both the infirmary for the Jesuits of Rome and the Jesuits working at Vatican Radio. Built in the 17thcentury, the Canisio was once a palace for an Italian noble family.

The entire complex is Zona Extraterritoriale, which means that while it’s not part of Vatican City proper, it does belong to the Holy See and is afforded the same protection as property within the walls of the Vatican, similar to the way a foreign embassy is viewed in a host country. So if there’s a fire, the Vatican Fire Department rushes over; if there’s a break-in, the Vatican Police Department is dispatched.

In the nearly 90 years that the Jesuits have called the Curia home, there have been a small number of upgrades (air conditioning was added in 2005), but nothing as dramatic as the two-year project that will conclude soon. Far from cosmetic, the work includes required code updates, such as asbestos removal, wiring and plumbing upgrades, new LED lighting, and fire-retardant measures. The work affects the entire complex with special care given to the Aula, or hall, where the 215 delegates for the Jesuits’ 36th General Congregation will convene beginning on October 2.

Many of those delegates will live right at the Jesuit Curia and the Canisio, while the rest will be accommodated at Jesuit residences in Rome. Importantly, all 215 will stay in Jesuit communities, meaning that at the normally hospitable Jesuit Curia, there’s no room at the inn starting in late September.

Father Giuseppe Bellucci, SJ, is the minister of the Jesuit Curia and is responsible for day-to-day operations — everything from food to laundry to housekeeping to mechanical. Nearing 80, he shows no signs of slowing down and is determined that the Curia “goes on every day in a perfect way.”

In the busy months of January and February, Fr. Bellucci plays innkeeper to upward of 40 guests per night, often Jesuits and lay collaborators in Rome for meetings. Previously the communications officer for the Curia, Fr. Bellucci is used to living above the store, as it were.

For Father Jim Grummer, SJ, a Wisconsin Province Jesuit who has served at the Curia for 11 years, living and working in the same building was not the biggest adjustment. Getting used to the large mid-day meal followed by extended downtime, siesta in Spanish and riposo in Italian, was something new. “It’s hard to get much business done because so many people are away from their desks napping, walking or relaxing. Fairly quickly, I learned not to fight it and, in fact, I really fell in love with the custom. I figured that I might as well take a long walk or a short nap. It’s a great way to detach that makes work in the late afternoon amazingly productive.”

A favorite walk for many of the Jesuits living at the Curia is through the terraced garden, where fragrant roses line the path and wisteria hangs overhead. It’s a great place to pray and a solitary oasis just outside the bustle of St. Peter’s Square.

Says Fr. Bellucci, “We are so lucky to have this garden, in the city of Rome — no one knows about this garden, and it is a paradise.”