You are here: Home / News / In the rooms of St. Ignatius 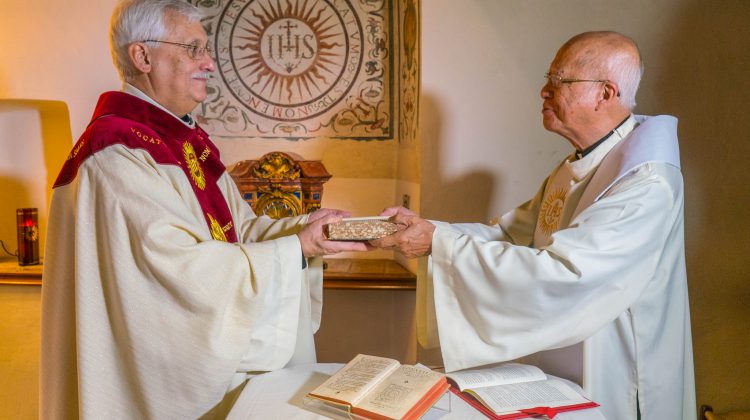 On Saturday morning, before the first Eucharist presided over by the new Superior General of the Jesuits, Fr. Arturo Sosa, a short and discrete ceremony took place at the Gesù, in the chapel of the rooms of St. Ignatius, the Camerette. The New Superior General was accompanied by a member of the General Council, Fr. Joaquín Barrero, by the archivist of the Society, Fr. Brian Mac Cuarta, by two electors, Father Bienvenido Nebres (the oldest of the electors) and Brother James Edema (the youngest elector). A deacon also accompanied them. Our photographer was also present.

After a moment of silent prayer, an excerpt from the Gospel of Saint Matthew was read. In this passage, Jesus reminds his disciples that they have only one ‘Master’ and that the greatest among them must be their servant.

In the same spirit, Father Bienvenido Nebres reminded the new General of the qualities he must possess, according to what St. Ignatius described in the second chapter of Part IX of the Constitutions of the Society of Jesus. Particular attention was drawn to the following words:

Do not seek esteem or honour from men, but rather seek to be pleasing to the Lord alone.
Love the Society, not as your own possession, but as that which has been committed to you.
Remember that you have been given to us as a guide so that we all may persevere and grow in this way to heaven that is the Society.

At the end of this reading, Father Nebres and Brother James Edema, presented to the General the Formula of the Institute and the book of the Constitutions with these words:

Receive the Formula of our Institute and the Book of the Constitutions of which today you have become the custodian: be attentive to the universal welfare of the Society so that with the grace of God and of your good governance, this apostolic body entrusted to your care may persist and grow in charity and at the service of Christ and of the Church his spouse.

In silence, the small group joined the large number of concelebrants, downstairs, for the beginning of the Mass of Thanksgiving.