You are here: Home / News / Prayers and support for the new General of the Jesuits 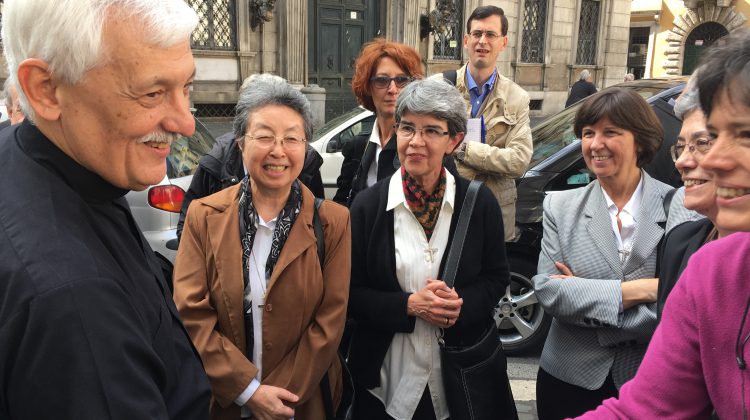 The subscribers to our newsletter, those who visit our website or are followers of GC36 on the social media will remember the solidarity in prayer that was created during the days before the days of the election of Fr. Arturo Sosa as Superior General of the Society of Jesus. The prayer “wave” did not stop with the publication of the result of the election. In fact, the communication office of the General Congregation has received a number of emails from people and groups who wanted to express their joy and to assure both the members of the Congregation and Father General of their prayers.

Here is a sample of these testimonies.

Finally, here is an excerpt from a “special testimony” that was sent by the President of the St. Xavier’s College (Calcutta) Alumni Association.

“More than 150 members of the Association met in the Indian city of Jaipur on 15 October 2016. The Conference began with the prayer where all members of SXCCAA and their spouses led by Rev. Fr. John Felix Raj, SJ, Principal, St. Xavier’s College, Kolkata, prayed for the new General of the Jesuit Order, Rev. Fr. Arturo Sosa, SJ, who was elected only on the previous day. The gathering also welcomed the new General with posters having the picture of the new General with a message of welcome to him from the St. Xavier’s Association, displayed prominently in the venue of the conference.

In the First Technical Session devoted to Jesuit Values, there was a presentation of GC 36 discussing its background and the process of the election of the new General. The Conference also paid rich tribute to St. Teresa of Calcutta on conferment of Sainthood to her as St. Xavier’s Kolkata was blessed by her several visits to the campus as a good neighbour. The second day of the conference began with the play back of the video of the opening prayer song of October 5 in the gathering room of the General Congregation: The Kingdom of God is Justice and Peace.”