You are here: Home / News / « A man used to work in complex situations » 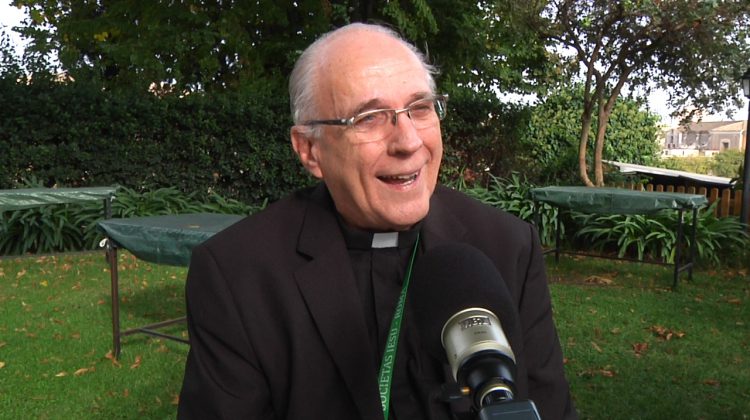 After an intense weekend, the work of the Congregation continues, but we are still working on bringing different testimonies of those who know our new Father General. Since last Friday, when he was elected, we have had many conversations with companions, friends, and different people around the Curia and around the world, that are helping us to have a better sense of who is P. Arturo Sosa, SJ. We give special thanks to the P. Javier Duplá, socius from the Venezuelan province, who is sending us first hand information from their province archives.

Jorge Cela, SJ is the president of the Conference of Latinoamerican Provincials. He is a long time friend and has a long work experience with P. Sosa. “Arturo’s history tells us he is a Renaissance man. His most obvious qualities are his people skills, and his ability to relate. I think we chose him also because he is a strategist, his training in political science and his ability, gives him an strategic vision that goes beyond the obvious. He has the ability to penetrate reality, discover its potential, and build new roads with everyone, working towards consensus. ”  The mission of the Society of Jesus is not the mission of a man, thinks Jorge Cela, not even the mission of the Jesuits. It is a much larger mission, which is widely shared  and this vision is one of the strengths of our new Father General.

His provincial, Fr. Arturo Peraza, has written an article in this web summarizing his vision on Fr. General. In his own words “He taught me how to find God in the eyes of the most vulnerables, on the seriousness of the analysis to understand the reality around us. He taught me to look into the history of our country as a way of understanding our present and the ways forward.” In previous conversations he defined Fr. Sosa as “a Jesuit with a large capacity to listen and to take decision. He is a man used to work in complex situations, knowing how to handle them with peace. The work at the colombo-venezolan border is indeed very complex because of the diversity of the tasks (social, academic, pastoral, etc.); in all these areas he knew how to develop it very well. He can have a large vision, aware of the social and intellectual changes that are occurring in today’s world.”. Also from Venezuela, Fr. Dizzi Perales describes Fr. General as “one of the Jesuits for whom I feel a lot of admiration. I see him as an excellent person, always attentive to the dynamic of the community, of the educational mission, of the country, of the Universal Society of Jesus. He is able to take care of the daily tasks and at the same time of large scale projects, always united with Jesus.”

Luis Ugalde, a spanish jesuit who has been in Venezuela for more that 60 year emphasizes two aspects from his personality: his great openness and his experience in very diverse fields of activity. “He is a man easily accessible, really open, with a very good formation. (…) He did his regency in a large coop, working with the campesinos. There he could look at the society from the point of view of the poor. But he was also Director of the Social Centre and, later, Rector of a Catholic University.” Jesús Rodríguez, a venezuelan jesuit who lived with Fr. Arturo for 8 years sees him as a man characterized both by ‘faith-justice’ and ‘faith-culture’, with a broad vision of the Society of Jesus that includes the lay people. Arturo Sosa was very efficient in the projects he led in the border region with Colombia, emphasizing the relationships with the Colombian Jesuits.

In the corridors of the curia, several members of the staff – those who are not part of the General Congregation but who work in offices at various levels – manifested their joy, stressing how close to the people the new General is in his way of being. Others mentioned that he is an intellectual who has a lot to contribute in many ways, but that he is at the same time a practical man. A proof of that: he had been chosen to take charge of the logistics of the General Congregation.