You are here: Home / News / “Faces from the Frontiers” – by John Dardis, SJ 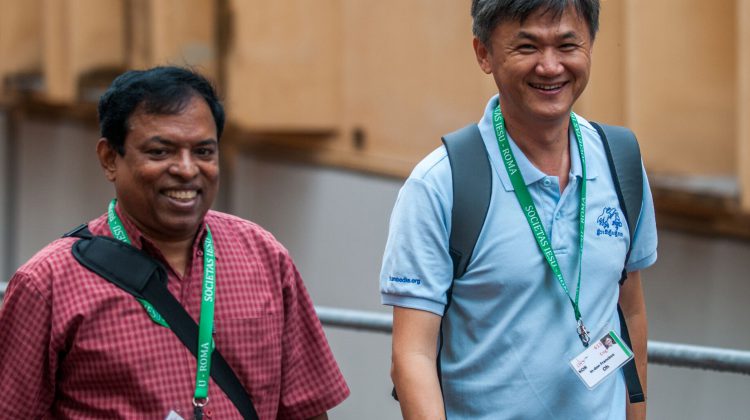 When you look around the aula at the General Congregation or share meals with people, it all seems quite ordinary. At first. You see a group of Jesuits – priests and brothers, smiling, joking, eating, having serious conversations, praying. Their dress is ordinary – in fact some could do with a new shirt or two! – with a wide assortment of styles and no uniformity except for official occasions. St Ignatius would approve.

But when you get to know the people and learn their stories you see something different, something quite amazing and inspiring.

There is Francisco de Roux, from Colombia, who has been involved in the peace talks there between the rebels and the government. Then there is José Minaku, the Provincial of Central Africa. His territory, so rich in its traditions, not to speak of its mineral wealth, has been torn by the conflict in the Kivu region near Rwanda and Burundi. Dany Younes is the Provincial of the Near East. His province includes Syria, Turkey, Lebanon. He has to accompany and support his men and those who work alongside them as they deal with the war in Syria, instability in Turkey and the over one million refugees who have arrived in Lebanon. One of his men, Frans van der Lugt was murdered just about 18 months ago in Homs. You can meet Jean Baptiste Ganza, Regional Superior of Rwanda-Burundi, who lost most of his family in the genocide back in 1994 and who is helping to build a new Jesuit region with reconciliation and mutual understanding as foundations. I’ve met up again with Korean Jesuit In-don Oh – I first met him a few years back just outside Phnom Penh in Cambodia, a country that had suffered so much under Pol Pot. Tony Corcoran is Superior of the Russian Region and Ukraine where a torturous war still rages. Hung Pham, from the Southern Province of the USA, is the son of Vietnamese refugees who left in the 1970s as boat people. The Regional Superior of Nepal is among us – Boniface Tigga. That country is still coming to terms with the aftermath of the earthquake there. And then the new Fr General, Arturo Sosa, an expert in Political Science who has worked for years at the political frontiers in Venezuela and now has come to lead the Society of Jesus to new frontiers.

All of these men represent frontier ministry. Frontiers where Jesuits are somehow at home; where they can be creative; can love; can serve; can give their lives if necessary. And what is most impressive is that they are not special. They represent the thousands back home who are quietly working away while all of us here are speaking, sharing, praying, dreaming…and imagining new ways of serving at the side of Jesus as he heals and liberates people today.

And finally, the most recognised frontier face, Pope Francis himself. He will soon address the Congregation from his perspective at the frontiers of the Church. What will he say? What directions will he indicate? One thing for sure is that he will keep us moving, draw us forward, point out new challenges. We’re looking forward to it.